The Difference Between Amorphous & Semi-crystalline Polymers 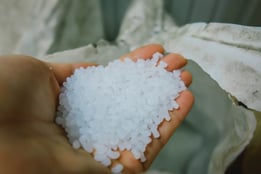 A defining characteristic that separates different thermoplastic polymers is whether they are considered amorphous or semi-crystalline. Popular thermoplastics used in the packaging industry such as HDPE and polypropylene, are classified as semi-crystalline, while others such as polystyrene and ABS, are considered amorphous. The main difference between these classes of thermoplastics are the arrangement of the molecular chains and how they, in turn, affect the behavior of the polymer under heat. Continue reading to learn more about the differences between the two thermoplastic classifications:

Receiving the classification of a semi-crystalline polymer means that the material exhibits organized and tightly packed molecular chains. The areas of crystallinity are called spherulites and can vary in shape and size with amorphous areas existing between the crystalline areas. A result, this highly organized molecular structure results in a defined melting point. These polymers are anisotropic in flow, so they exhibit greater shrinkage transverse to flow rather than with the flow, which can sometimes result in some dimensional instability.

While semi-crystalline polymers exhibit organized and tightly packed molecular chains, the polymer chains for amorphous plastics are more disorganized. In this type of material the molecules are oriented randomly and are intertwined, which causes them to have a range of temperatures at which they will melt. To give you visual, the organization, or lack thereof, of the polymer chains are often compared to a plate of cooked spaghetti. This characteristic also makes for an easier thermoforming process. These polymers are isotropic in flow, so they shrink uniformly in the direction of the flow and transverse to flow. This typically results in less shrinkage and less tendency to warp. In terms of properties, amorphous polymers typically have better impact resistance, but are more prone to stress cracking and have poor fatigue resistance. In addition, these polymers are typically transparent.

Not sure which material is right for your application?  For more information on our products, check out our materials page or click on the link to the left to get in touch with our sales team today!